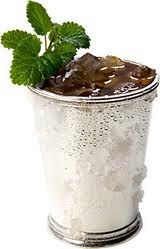 From May to October each year, it’s mint julep season at my house, to the delight of us all.
The original meaning of “julep” was a medicinal cocktail of sorts, combining various healing herbs, plants, aromatics and fruits. Those of you reading from back home are already familiar with the mint julep (or your DNA is); those of you here in Montreal are surely familiar with the Gibeau Orange Julep restaurant, whose foamy, fresh-squeezed orange juice gives the restaurant its name.
Mint juleps are indeed powerful medicine. They are served in little metal cups made of silver, pewter or aluminium which keep them delightfully cold.
A julep’s deliciousness can surprise some drinkers, even those who hold their liquor well, causing them to need a restorative nap on the couch before they can stagger into the taxi home.

An old friend said it well after his first sip of mint juleps. “Why are these cups so small? Because these are dangerous. I feel like I want to drink a whole pitcher of them, and then pass out in a lawn chair in the sun.”

I have also seen people drink me under the table with my mint juleps, walking out the door at the end of the night on their own two steady feet, and it’s never the ones you’d think. As they say in Spanish, “Los que no corren, vuelan.” (Those who don’t run, fly instead).

Recently, I came across a tune in one of my yellowed old jazz books called “One Mint Julep.”

I wondered to myself, has anyone ever had just ONE mint julep… and not counting the bucket at a Kentucky Derby Bucket Party (where dinner is served from big tin buckets – a bucket of juleps, a bucket of fried chicken, a bucket of potato salad…)

I Googled it the next day, and learned that Ray Charles is one of the artists who has recorded it. How ever did I miss this song? The lyrics tell the story of a man who invited a woman back to his place and all he had to offer was mint juleps… “One mint julep was the cause of it all… I’m done drinking whiskey, ’cause I’ve got six extra children now from getting frisky!”

For those days when I actually need to accomplish something, I also make a version without whiskey – I substitute chilled Yogi Ginger Tea for the bourbon.

My recipe is unconventional, and I’m sure purist bartenders would disapprove, the ones who write long, pissed-off diatribes about martinis and Manhattans and how many drops of Angostura bitters on the Webtender forums. It would be all like, “You’re supposed to muddle the mint… superfine sugar… Kentucky bourbon….”

The thing is, I think my rogue juleps really taste better than the purist juleps with all the muddling and the fancy liquor and powdered sugar. The flavour is smoother and they go down easier. Several roomfuls of people who don't remember the great time we had after a pitcher of juleps would surely agree with me, if their memories would only permit.

I make a cross between simple syrup and “sweet tea” (Southern for iced tea) using mint, Demerara sugar and a touch of ginger. This can be kept in the fridge, which makes the julep colder. It also makes them quicker to make. The infusion, because it tastes more like sweet tea, somehow makes it taste more Southern to me. The Demerara sugar is not overly sweet though, and is evocative of the darker sugars used in Southern cooking like molasses and brown sugar.
My first choice of bourbon is Wild Turkey for its smokiness, but since it's nearly impossible to get in Quebec, I most often use Jack Daniels. (technically "Tennessee sipping whiskey," for the Webtender sticklers out there.)

Mint Julep Syrup
One bunch mint leaves
1½ litres water
1½ cups Demerara sugar
A little peel from a ginger root (keep your peel when you cube ginger forother recipes)
Cut the bottom of the bunch of mint leaves and place them in a large, deep saucepan. (Reserve the pretty tops of the stems for the juleps themselves). Cover with sugar (and ginger root, if using) then water. Bring to a boil, then turn off heat and let steep for 4-6 hours. Strain and keep in the refrigerator. (Theoretically, this will keep for about a month in the refrigerator).
To serve, take a sprig of mint and gently rub it around the bottom of the julep cup to release its aroma. Place in the bottom of the julep cup, or float it on top of the drink.
Fill the cup 1/3 of the way with bourbon or iced Yogi Tea, 1/3 of the way with syrup and fill the rest of the way with ice.
Posted by Hannah Roberts Brockow at 4:20 p.m. No comments:

Email ThisBlogThis!Share to TwitterShare to FacebookShare to Pinterest
Labels: recipe

Some days it seems like the more fluent Fred and I get at English and French over the years, the funnier our mistakes and quirks are.
Fred’s English comprehension is astonishing – our friend Josh gave him a gift of English slang flash cards one Christmas, and he ended up using it to teach Josh and me. He already knew most of them!

So it’s unusual for him not to find the right word. Last night, we discovered a small vocabulary gap, which I found hilarious.
Fred: “My mother’s sister…”
Me: “Your aunt…”
Fred: “Yeah, that.”

Later, in the same conversation:
Fred: “Michel’s brother’s son…”
Me: “His nephew.”
Fred: “Or that.”
Me: “Were you daydreaming during the family chapter in English class?”
Fred: “I just didn’t care about that shit.”
Me: “At that age, you just wanted to understand rock songs and play American video games.”
Fred: “Yeah!”

I guess Fred did the right thing to marry into a Southern family. In the South, because people know everyone else in small towns, it’s common to hear people talk about their “brother’s wife's cousin.” Maybe because of this, I just never really noticed the lack of “aunt, uncle, niece, nephew” until last night.

I make different kinds of hilarious mistakes because I’m more of a writer than a talker. I have a special gift for mispronouncing a word, using another similar-sounding word, or randomly happening upon an unfortunate metaphor that implies an embarrassing sexual connotation, turning my earnest, thoughtful sentence into a 360-degree, red-faced conversation stopper.

(Funnily enough, this special gift has also turned up when I’m conversing with people from England or Ireland – and yes, I do know better than to mention South Carolina’s state dance, “the shag.” )

For example, I was recently at a friend's house, and several of us were in the kitchen drinking wine, doing a little vegetable chopping and skewering as we got ready to grill kebabs. Alex was making us some guacamole, and it was really starting to look amazing. He was chopping a few red onions, limes ready to squeeze, and I said, "Il va être excellent, ton guacamole." (Your guacamole is going to be excellent. )
Alex replied, "C'est quand même toi qui fait les meilleures trempettes, je me rappelle toujours des petits plats que tu apportais aux partys à Katimavik."(You make the best dips though, I still remember the food you used to bring to parties at Katimavik).
Please note that at this point, the conversation is so mild and food-oriented that it could be broadcast on a lifestyle channel.
Then, I said, "C'est vrai que je suis la reine de la petite trempette."
All the guys in the room (Fred, Alex and Pascal, whom I had JUST MET) burst into laughter. Rather than saying that I was the queen of making dips, I said that I was an easy lay. Literally – literally – I proclaimed myself the “Queen of Quickies.”

Fred’s very favourite of this type of mistake is the time I pronounced “massothérapeute” as “massothérapute.”
That made the word for “massage therapist” sound like a person who gives a “massage with benefits,” since “pute” means “whore.”

In fact, I was telling him about the most innocent of chair massages from an earth motherly massage therapist named Nathalie, so I didn’t understand the confused look on his face, but when he corrected me and explained it, we both laughed until tears rolled down our faces.

As funny as these linguistic mishaps are, they serve an even greater purpose in our marriage than providing comic relief: They make us work hard at saying exactly what we mean.

We communicate very consciously and carefully at the times that we disagree, partly because we've seen what kind of unexpected twists and turns a simple sentence can take. This can certainly be true when couples speak the same language, too, and monolingual couples often think it must be much more difficult for Fred and me when we disagree or need to clear the air.
I think, though, that it may actually be easier for us because of the habits we've developed over the years of clarifying, reflecting (restating what the person has just said), asking questions and not taking any word or phrase at face value.

As a bonus (even though sometimes there's clearly no stopping me) I have my own trusted audience who has kept me from saying things like "massothérapute" more times than not!
Posted by Hannah Roberts Brockow at 11:26 a.m. No comments: